Initially, the table hasn’t been filled and Polycarp wants to fix it. He writes integers from 11 and so on to the table as follows. 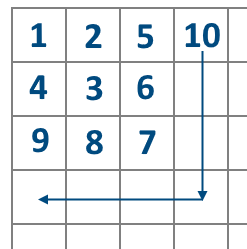 The figure shows the placement of the numbers from 11 to 1010. The following actions are denoted by the arrows.
The leftmost topmost cell of the table is filled with the number 11. Then he writes in the table all positive integers beginning from 22 sequentially using the following algorithm.

After that, he fills the cells from the right to the left until he stops at the first column (look at the horizontal row in the figure above). Then Polycarp selects the leftmost non-filled cell in the first row, goes down, and so on.

Each test case consists of one line containing one integer kk (1≤k≤1091≤k≤109) which location must be found.

For each test case, output in a separate line two integers rr and cc (r,c≥1r,c≥1) separated by spaces — the indices of the row and the column containing the cell filled by the number kk, respectively.