This railway network is splitted into zones named by first kk capital latin letters. The zone of the ii-th station is zizi. City center is in the zone A. For all other stations it is guaranteed that the first station on the road from this station to the city center is either in the same zone or in the zone with lexicographically smaller name. Any road is completely owned by the zone of the most distant end from the city center.

Tourist will arrive at the airport soon and then he will go to the city center. Here’s how the trip from station vv to station 11 happends:

Tourist always selects such way to buy tickets and pay fines that minimizes the total cost of trip. Let f(v)f(v) be such cost for station vv.

Unfortunately, tourist doesn’t know the current values of passipassi and fineifinei for different zones and he has forgot the location of the airport. He will ask you queries of 33 types:

The next line contains nn symbols z1z2…znz1z2…zn — zizi is the name of the zone of the ii-th station. It is guaranteed that the conditions from the second paragraph are satisfied.

For each query of the third type print the answer to it.

Note, that the fine can be cheaper than the pass. 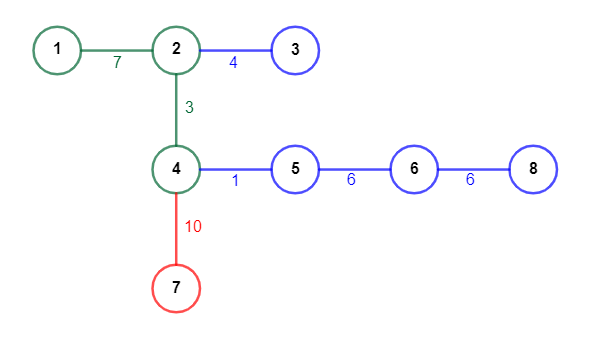 After the second query, the cost of the pass in the zone A has become 1010.

In the third query, the airport can be located only near the station 33. Optimal solution will be to buy the pass for zone A. During the first 33 seconds of trip tourist will be in the zone B. Then he will move to the zone A and will be scanned there on the 44-th and the 88-th second of his ride. Since he have a pass for this zone, he won’t pay fines.

After the forth query, the fine in the zone A has become 33.